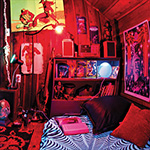 I really loved what the North American stoner rock gods Monster Magnet did with their latest album Milking the Stars: a re-imagining of Last Patrol. That was a re-make of their latest studio album Last Patrol originally released in 2013. You can check out my review over here. Now they have done exactly the same, more psychedelic, alternative universe treatment for their 2010 album Mastermind and the results are stunning. Compared to the the original album, there are now only ten tracks instead of twelve, the track order is almost completely different and the titles are now often slightly changed. The band obviously had lots of fun doing re-writing,  re-recording and re-arranging and making most of the songs pretty different in structure and mood. This sounds like a brand-new album and a really great one too!

The old  "Dig That Hole" has turned into "She Digs That Hole" and starts off the album in a great, dirty way.  "Watch Me Fade" was originally just a bonus track, but here it's the second song and I really like this organ-driven, garage rock styled version of this rather melodic track. "Mastermind '69" is really psychedelic and hypnotic now with all the sitar, organ and fuzzy guitar... I love how the track grows and blows your mind. Another, even more trippy highlight is the over 9-minute-long "Cobras and Fire (Hallucination Bomb)" that's pretty atmospheric with some Mellotron, acoustic guitars etc. Excellent! The peaceful, dreamy and chilled-out version of "Gods and Punks" now entitled "Gods and Punks and the Everlasting Twilight" sounds rather different here without any drums or heavy rhythm guitars. "The Titan Who Cries like a Baby" has been shortened into "Titan", and this is very atmospheric, a bit spooky, almost ambient stuff with piano, orchestration and weird sound effects... "When the Planes Fall from the Sky (Sitar and Psych Version)" rocks out in the heavy, doomy Black Sabbath style like it used to, and this is perhaps the least altered song but still more psychedelic. The Temptations cover  "Ball of Confusion" is fast, pounding, heavy space rock in the vein of Hawkwind, so of course one of my favorites... I guess this is sort of a replacement for the fast rockers "Bored with Sorcery" and "100 Million Miles" on Mastermind. The instrumental "Time Machine" cools things down again with piano and peaceful guitar sounds and effects. The album is finished with the long "I live Behind the Paradise Machine: Evil Joe Barresi's Magnet Mash Vol. 1", and things get really psychedelic and weird now... What a trip! This album is a must-have for all Monster Magnet fans and works really well on its own, so you don't even need to have heard the original Mastermind to dig it. The album will be out next month, personally I can't wait to get the limited red 2LP version with a cool slipmat!