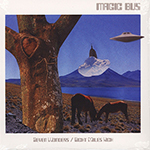 Magic Bus is a progressive psych rock band from Devon, U.K. I have not heard from them before and this cool little 7" is their first release on Regal Crabomophone / Fruits de Mer. Since it has an original on the A-side it's on the sister label as FdM is (usually...) reserved for covers only. Magic Bus has two albums and one single out before this release, and I think I just might have to find copies since this sounds very nice. They clearly are highly influenced by the Canterbury scene of the late 60s/70s, especially Caravan comes to mind while listening to their lovely sounds.

Their own song "Seven Wonders" is taken from their latest album "Transmission from Sogmore's Garden" and starts off in a peaceful, slow mode with great, soft vocals, gentle guitars, organ and flute. Later on things get more progressive and a bit heavier, and there's a groovy organ solo at the very end. I like this a lot! The Byrds are of course one of the original innovators of the whole psych rock genre, so it's a little miracle that their mind-altering hit song "Eight Miles High" hasn't been previously covered by any band on Fruits de Mer. This excellent rendition starts with just vocals and organ, and after a bubbling psych sound effect the song starts moving and we're in blissful aural heaven. They really make this track sound like Canterbury scene still also being respectful for the original harmony vocals etc. and I love it. What a great debut release for Fruits de Mer / Regal Crabomophone and I have a feeling there will be more...