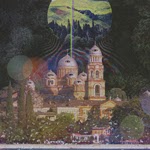 Suns of Thyme is a new alternative/hypnotic/psychedelic/dream pop/post-punk/shoegazer band from Berlin and Fortune, Shelter, Love & Cure is their debut album. They have a lot of 80’s post-punk/gothic rock vibe in their dark and mesmerizing music (Joy Division, Killing Joke, Bauhaus, The Sisters of Mercy, The Cure etc.) but just as important part of their universe is the psychedelic shoegazer/dream pop stuff (especially The Verve and some other 90’s UK acts.). Some recent reference points might be Tame Impala, The Black Angels and even The Dead Skeletons. And there’s even lost more to their sound… I just got to say I’m in love with this album, since I can appreciate both of these worlds, and there really isn’t that much difference when you look with your third eye. I know that some kind of post-punk/indie rock can now be even pretty popular in mainstream, so I guess this band could make it big unless this trend dies out too soon for them. But hey, let’s focus on this album that has 10 excellent, catchy and magical tracks.

“Violent Eyes” starts off the album with droney synth sounds and then a Joy Division like guitar and beat joins in. The great vocalist has a dark and powerful voice that suits this kind of music very well. On “The Way” things are getting a bit more psychedelic already, but this is also closer to dark 80’s post-punk. “One Song” has a very hypnotic, pounding beat and some great, psychedelic guitar work. This makes you want to put lots of mascara and tight leather pants on and dance! One of the most psychedelic tracks (and the first one I fell in love with) is “Soma (God for Gods)” and I still think this might be the best song on the album. It just has something special about it; it’s highly effective and intoxicating! The slower, groovy “The Years We Got Are Not Enough” is closer to Led Zeppelin or something that Oasis might have done in the early 90’s. The weakest song, if you ask me. “Blue Phoenix Tree” is a beautiful, melancholic track with great sense of melody and “Cataclysm 2048” has a more electronic backing. One of my favourites is the dark, rather slow, mystical and hypnotic “Asato Maa” that somehow brings to mind The Dead Skeletons. It’s also the longest track on the album. Then after a short, synth-based “Interlude” we’ve got the excellent, dreamy last track “Earth, Over” that sums everything up in a wonderful, blissful way. What a superb album!