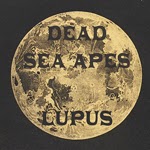 Lupus is the first full-length by Manchester-based instrumental, psychedelic space drone experimentalists Dead Sea Apes. The 57-minute album was released on CD-R in 2012 on the band’s own label but has now been put out on tasty, limited golden (150 copies) as well as standard black (350 copies) vinyl 2LP by the great Cardinal Fuzz. I have heard some of the band’s earliest output and it rocked more in the kraut rock vein than this album that has lots of very atmospheric and ambient post rock moments. Nothing wrong with that, as long as they sound as good as they do here! Similar stuff can also been found on the sold-out split with Black Tempest.

The first track “Pharmacon” is just dark, hazy ambient dreamscapes but works very well if you give it a chance. The over 16-minute, very mysterious and hypnotic, “Knowledge and Conversation” starts up slowly. This has a clear guitar and bass riff as well as some light drums and drone. The track grows and gets more psychedelic and intense along the way and I really enjoy the vibe. “Still” is a shorter, rather quiet and peaceful piece, and “Something to Do with Death” a melancholic, beautiful and atmospheric number that brings to mind many post rock bands. The short “Blood Knot” is a tad more experimental. One of the key tracks is the almost 14-minute-long “Wolf of the Bees” that is slow, droney and atmospheric post rock stuff again. The album ends with the experimental, druggy short piece called “Medicine Lodge”. I do like this album, but I somehow hope that the guys would rock out more on the next album. I wonder how they are live?