Space Mirrors: The Other Gods 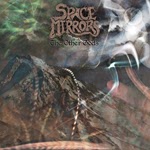 I have been following this international space rock/prog metal collective led by Russian multi-instrumentalist Alisa Coral (a big Hawkwind fan!) since the beginning, and the band has progressed CD after CD. At first my only complaint was that the music at times got too chaotic and even disharmonic due to so many layers of different instruments and especially programming. This problem has now been solved, so that even at its fullest sound the music isn’t “too much” for my ears. The Other Gods is the second chapter in the Cosmic Horror series heavily inspired by the stories of H. P. Lovecraft, who happens to me one of my absolute favourite writers, so there’s another reason to really enjoy this album. As usual, Alisa has recruited other international musical cosmonauts on board, like new members Claudio Tirincanti (Blaze Bayley, Tim “Ripper” Owens etc.) on drums and Gabriel Monticello (Spaceseed etc.) on bass. I’m really glad the band now has a real drummer on all the tracks instead of the programmed drums that were used in the past. Martyr Lucifer has been doing the vocals for a long time and so is the case this time, as well. I prefer his dark, low voice over his harsher, sometimes even growling style that is now totally gone. There are quite a lot of vocals on the CD, and the vocals are now maybe a bit too same all the time (especially with the standard, mid-paced going that most of the Space Mirror albums are composed of), but luckily there is some variation like powerful higher-pitched and almost whispered vocals a few times. Sparky Simmons (Acid FM) recorded most of the excellent guitars. Nik Turner and Cyndee Lee Rule are among the guests again.

“Stranger in the Mirror” is a surprisingly catchy and melodic, energetic but dark metal track that opens the album in a great way. Lots of keyboards and synths, as usual, but everything is in balance. “The Nameless City” has a laid-back beginning, but then it gets pretty heavy and oppressing. “She Devil” has more melody and stuff going on and it’s a pretty great song, like the over eight-minute “Frozen City of “Cubes and Cones” that also has some more atmospheric parts and Mellotron by James Hodkinson (Pre-Med) as well as sax by uncle Nik. “(The Case of) Red Hook” sounds quite progressive but still heavy. One of the high-lights definitely is “Strange High House” that has great melodies and flute and sax by Nik. The longest track is “Times Unknown” at 10:33 starting with some exquisite piano that returns several times along the way. This is a rather epic, progressive piece that has lots of different moods and sections. Nik plays some flute again. Great! “The Other Gods” starts off with some groovy beats and spacey synth sounds. Very dark and even scary atmosphere here… The album is finished with the partially a bit slower, gloomy track “Doom of Sarnath” that is one of my favourites and also has psychedelic synths swooshes. This is a very good song too! I think that this is the best effort by Space Mirrors so far, so just check it out if you dig progressive, spacey and a little psychedelic metal like Arjen Lucassen.