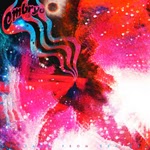 Free jazz/prog/traditional ethnic music group Embryo was formed in Munich in 1969 and is unfortunately one of the numerous kraut rock bands that I’m not that familiar with. Anyway, they were rather popular in the early 70s and have been somewhat active to this day. Apparently their music changed from more jazz/rock fusion based closer to world music probably even before the term was commonly spread. This live album limited to 500 copies on vinyl only was recorded in 1976 has elements of both words so I guess they were in the middle of this process back then. There are six tracks on the LP but the band flows on so continuously that it’s hard to say when the tracks change. The sound is typical for live recording from that age, so you can hear every instrument but there is a certain degree of distortion and hiss, but you get used to it very soon and get sucked into this marvelous sea of progressive, jazzy and also psychedelic sounds. You’ll get groovy rhythms, great Fender Rhodes, organ and vibraphone work, jazzy horns and ethnic sounding flutes and excellent, progressive and psychedelic electric guitar, hypnotic bass plus also some occasional vocals. At times the going gets very hypnotic and spacey which I love. There are some similarities to early Gong I guess, but without the silly wackiness. There is a certain jam feel going on, and especially some of the B side seems to be totally improvised. This is great stuff that you should check out if you are interested in progressive, ethnic and jazzy sounds of the era.