Earthbound Machine - Destined for the Grave 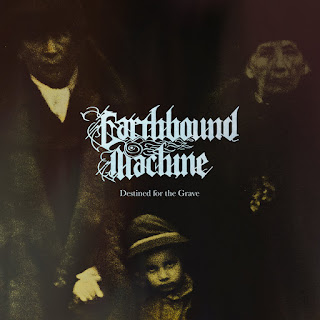 Destined for the Grave is the debut full-length album by Finnish doom metal four-piece Earthbound Machine. I have been following the band for several years now and you can check out my reviews of their 2015 one-sided 12" EP over here and 2013 demo/EP over here. I think the band is now heavier than ever but there are also some psych/stoner elements in  the mix from time to time which I like. What still differs Earthbound Machine from your average doom metal band are the clean, melodic, great and powerful vocals of Ilkka Haavisto. His voice and style brings to mind some of the greatest singers in grunge but the music of E. M. really has nothing to do with it otherwise. The epic doom metal fanatics will know the bass player Jussi "IronHammer" Myllykoski as the ex-bass player of Lord Vicar. His bass sound is now perhaps more massive than ever... Guitarist Jussi Parkkali is excellent as well and the drummer Ville Vierimaa really knows exactly what he's doing too.

There are six tracks on the LP. The production is superb and the vinyl pressing made in Estonia is flawless. The mid-tempo "Figures in a Terrain" starts off the funeral procession with crushing heaviness. It's not just one simple heavy riff though, it has melody and cool hooks as well. I'm already very impressed! On "Rallies in Rage" things get darker, slower and doomier. Ilkka sounds pretty much like the sadly passed Chris Cornell. Another killer track. "Man in the Attic" has at first a beautiful, melancholic atmosphere but it also soon gets heavier. This is not exactly traditional doom but still heavy and dark. Later on the guitar gets rather psychedelic... The shortest track on the album is "Marrow" at 4:37. The sound is mercilessly heavy... But once again the melodic vocals sooth your suffering soul a bit, even though the lyrics are very gloomy as well. "In Its Absence" sounds like some of the old school doom metal bands without being a straight Vitus/Pentagram rip-off in anyway. The album is finished with the longest (6:47) song "The Undoing" that is also maybe my favourite. Some killer riffing on this one... You just can't avoid banging your head. A very cool ending to an amazing, heavy doom album. One of the best records released this month for sure! If you happen to be in Finland, don't miss their album release gig tomorrow (30.4.2019) at Kuudes Linja, Helsinki. They are supported by the death/doom metal harbingers Cataleptic.