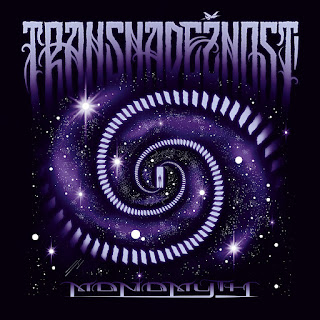 Transnadežnost' is a cool, (almost) instrumental stoner/psych rock band from St. Petersburg, Russia. Somehow they have stayed outside my radar until I received this CD a couple of weeks ago and immediately fell in love with the band. The band is formed by Aleksandr Yershov – guitar, Alesya Izlesa – guitar, glockenspiel, Nikolay Vladimirovich – bass and David Aaronson – drums, percussion. There are also a couple of guests on Monomyth: vocals, lyrics on "Huldra" – Egor Svysokihgor and trumpets on "Star Child" & "Day/Night" – Aleksey Gorshkov. I really like the band's dreamy, progressive and spacey style that has some resemblance to bands like Monkey 3, Papir or Causa Sui, but they don't actually sound exactly like anyone else. The band has some previous digital only releases but, as far as I know, this is their first physical output.

There are seven tracks on the CD. The bluesy and dreamy "Pacha Mama" starts off the journey at first in a rather tranquil manner. There are also some more intense, progressive stuff in there to make things more interesting. Very cool! Also "Ladoga" has a peaceful beginning but after some hypnotic stuff it starts to rock out in a sort of trancey way. Things cool down again towards the end. The pretty long (9:30) "Kailash" has lots of different stuff in it from fast kraut/stoner rocking and groovy mystical heavy psych to weird, experimental and almost ambient jamming with percussion. Amazing! The bit shorter "Star Child" is an atmospheric track with trumpet to give it a sort of post rock vibe. The spacey and dreamy  "Huldra" is one of my favorites and it's nice to have some vocals for a change. "Chewbacca" is the album's shortest track at 2:41 and very good and psychedelic as well. The album is finished with the beautiful and hypnotic "Day/Night" that is one of the highlights and also the longest track (12:15). The trumpet again gives some jazzy extra flavor to the trance-inducing vibes. Fans of bands like Maserati will enjoy this ride! In summary, Monomyth is an excellent, highly enjoyable album full of trippy, atmospheric and adventurous greatness and my only complaint is that this is not out on vinyl. You can buy the digipak CD from the band's Bandcamp site with free postage! Also check out the label's Bandcamp site.