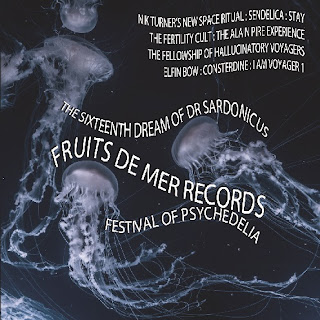 This is a cool various artists double LP set recorded live last year at the annual Fruits de Mer Records gathering at Cellar Bar in Cardigan, Wales. Having been a FdM fan since the very beginning, I have always wanted to go there, but the distance and timing has so far made it impossible. It's wonderful to get to taste the atmosphere there at least a bit through this sonic kaleidoscope.

First we get a couple of tracks of great minimal folk music by Eflin Bow. I Am Voyager performs the melancholic "Songbird" and things are still kept pretty simple and plain. Stay from Barcelona usually rocks out, but the first track by them "Old Man" is rather laid-back and "Rock'n'Roll Woman" a more pop oriented affair, but at least we now hear a full band with drums and all. On side two Consterdine offers a spacier instrumental electronic piece with "A Spell for Leonard", nice. Another Sendelica related act The Fellowship Of Hallucinatory Voyagers take us on a beutiful ambient mind journey with "Moonlight Moorings". I am not familiar with The Alain Pire Experience apart from a couple of previous FdM compilation appearances, but their indie psych/pop/rock song "Drifting South" with a long solo section sounds pretty excellent.

Sendelica, the main organizers of the festival, have the side three for themselves. "BS", originally from last year's "Cromlech Chronicles III" is a superb heavy rocker and on the 14-minute "Maggot Brain" the band takes the Funkadelic classic to new hights once again. This track was also the band's debut on Fruits de Mer in 2010 and the 7" is now very collectable! One of my favourite bands. Then it's time for Finnish psychonauts The Fërtility Cült who I've also followed since the beginning. It's good that also they are now part of the FdM family. Their heavier sound is a welcome addition and "Cosmic Kaishakunin" from their debut album is a cool, slow, doomy and heavy rocker while the keyboards and sax add more jazzy, progressive vibes. The festival's special guest Nik Turner finishes off the 2LP with his New Space Ritual band. First we've got the closer to 10-minute Hawkwind classic "Steppenwolf". I love this song! "Walking Backwards" is a cool space rocker from Space Ritual's excellent Otherworld album and it works really well here as well.

All in all, this is a great historical document of a very special festival and I'm so glad that I got to get a little glimpse of what it might have been like to be there. The sound quality is excellent and the 2LP is a cool item to have for all Fruits de Mer followers with so much different but great music on it.