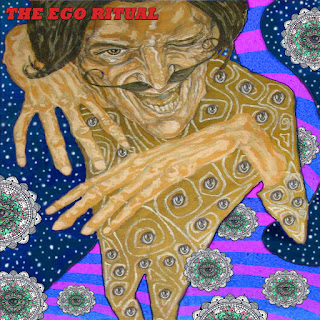 The Ego Ritual is a new three-piece (four-piece live) alternative / psych rock band from Lincoln, U.K. The reason I'm reviewing this debut EP of theirs is probably the fact they they have a (so for rather loose) connection to Fruits de Mer Records. They are going to play at the label's summer festival The 17th Dream of Doctor Sardonicus in Wales this year and there will also be an ultra-limited split lathe-cut with Three Dimensional Tanx (another band playing) on sale there.

On the basis of this five track CD/download EP I wouldn't describe the guitar-oriented music of The Ego Ritual as highly psychedelic or mind-blowing. It has some 60s/70s/80s/90s psych rock/pop sensibilities, for sure, but more on the indie/mainstream side of things I guess. "Chakra Maraca" opens up the EP with great melodies and quite a lot of energy. The bit nasal voice of singer James S. fits the bit Chemistry Set styled song very well and I also like the guitars and rhythm section. Nice and catchy! "Ten Points for the Red Star" is almost hard rock until there's a tranquil, soulful part in the middle. The mid-tempo "Serenade the Ley Line" brings to mind Chemistry Set as well, maybe some Magic Mushroom Band too. The longest track is the great "Days of Set" at 6:32. This sort of reminds me of Anton Barbeau: great pop melodies, indie rock guitars, all that. One of the highlights! "Outro" ends the EP in atmospheric soundscapes including percussion. The Ego Ritual is for sure a band to look out for, let's see what they come up with next.