No Man's Valley - Outside the Dream 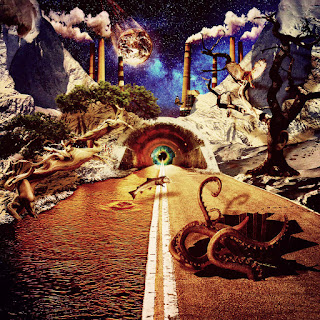 Outside the Dream released last month on the excellent Tonzonen Records is the second album by No Man's Valley from Netherlands. The band plays soulful, psychedelic blues rock that gets heavier when needed. The first two songs "Outside the Dream" and "Eyeball" are slow and bluesy, but then "Hawk Rock" is a much more energetic thing. "From Nowhere" is the longest track at 7:51 and has slow, dreamy, sunburned psych rocking vibe where keyboards offers some more atmospheres. The guitars are occasionally pretty heavy, though. A very enjoyable track! The singer can sound anything from Jim Morrison to Glenn Danzig which is cool.

"Into the Blue" starts off very peacefully and is then mostly emotional, hazy indie rock. "Blows" is a dark and melancholic song and I also like the hypnotic and heavy, psychedelic elements in it. Maybe my favourite? "Lies" is a shorter and faster track with some garage rock vibe. The album is finished with the creepy and experimental "Murder Ballad". All in all this is a pretty interesting and atmospheric album and you should check it out if you are into dark, bluesy indie psych rock with elements of the past and now.