Astralasia - A Different Kettle of Fish 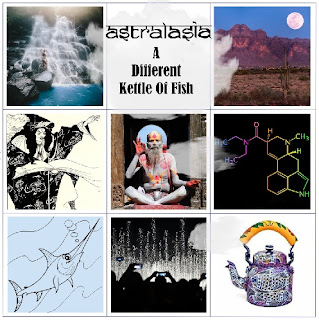 Okay, something a bit different has once again been cooking at the Fruits de Mer fishing camp! Astralasia main man Marc Swordfish has been collaborating with Keith for a few years already for some special remixes for 7" bonus CD's and exclusive members only compilation CD's. There have also been two amazing Astralasia 2LP's Wind on Water (2014) and Oceania (2017) that Keith has released. This 2LP set includes some of the remixes and re-imagings of cover songs and originals that were originally recorded for Fruits de Mer by Sendelica, The Chemistry Set and Superfjord as well as some things especially reworked for this release. For a long-time Astralasia fan like me this really makes me drool!

The A side begins with "Johnny's Little Brainticket (lounge mix)" that is based on tracks from the Fruits de Mer 2014 Annual and Postcards from the Deep flexi disc box-set. The lysergic Brainticket vibe has been taken to the 21st century with a groovy electronic beat, I love it! This flows seamlessly into the beautiful ambient piece "Sargasso Sea" edited from the Astralasia live LP Tales From The People Who Are Astralasia (one of the very few Astralasia LP's I'm missing...). That one turns into an alternative mix of "Love or Confusion" that appeared on the special edition of The Chemistry Set's Endless More and More LP. Sitar, lots of acoustic guitar and other stuff on top of hypnotic beat, just wonderful... Also some vocals on this one. On side B, "Deep Magic, A Love Supreme" originally appeared on the Coltrane 7" (by Superfjord and Earthling Society) bonus disc but it's great to have this on vinyl as well! Super groovy and hallucinogenic, would do the trick at a trance party. This trip turns into "Fountains of Ambience" that has only appeared on The Chemistry Set Fountains of Neptune members club free CD. Trippy-trippy...

On side C we first have "Johnny's Little Brainticket in Dub", again based on the tracks from the Postcards from the Deep box-set. "Shamanic Waterfall" appeared on the Coltrane bonus CD and it's a highly enjoyable, psychedelic and relaxing journey to inner space. On side D "The Sorcerer's Apprentice's ambience mix" has been previously heard on the bonus CD of The Fruits de Mer Records Guide to the Hitchhiker's Guide to the Galaxy 7" and it's a magical ambient piece. Then follows an instrumental mix of "The Desert", a vocal mix of which can be heard on Astralasia's "Wind on Water" 2LP. Very nice chilled-out soundscapes! The album is finished with the amazing "Timothy Leary Forever (Legend of  Mind remix)" from the bonus CD of The Chemistry Set's Firefly 7". Leary's message is clear and powerful here! The original track is one of the best songs The Moody Blues ever made, The Chemistry Set's cover is one of the highlights of the whole FdM catalogue and I just love Astralasia so it's easy to figure out how I feel about it. All in all, A Different Kettle of Fish is an amazing double LP of some of the best Astralasia works I've ever heard and a perfect opportunity to hear some of the stuff for the very first time and at least for the first time on mighty vinyl. This is a must-have for a FdM fan who also likes modern but still totally mind-expanding production. Mind-blowing!