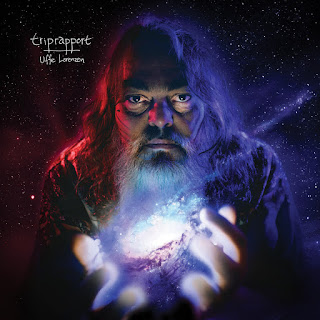 I'm sure all the Astral Zone readers are familiar with multi-instrumentalist/singer/composer Uffe Lorenzen by now, or at least some of his bands that include On Trial, Baby Woodrose, Dragontears, Spids Nøgenhat and Pandemonica. I've been a big fan since the On Trial days. This Danish psychedelic wizard chose to go solo and sing in Danish a few years ago and his first solo album Galmandsværk was released in 2017 to a great acclaim. Triprapport is his second solo album and will be released on the 10th of May on black vinyl limited to 1500 copies as well as on a digipack CD. Early LP pre-order copies also come with a poster. Uffe's solo material is less rock oriented than On Trial or Baby Woodrose and more in the folk style. The music is maybe a bit less obviously psychedelic too, but Uffe's journeys in other realms are still clearly evident in the deep, often melancholic vibes.

My Danish is unfortunetaly rather limited, but track titles like "Psychonaut" (the beautiful opener) or  "Triprapport" speak for themselves. Uffe's great vocals are maybe even emotional and touching than before, you can hear the wisdom of years of tripping in there. The first "single" track that was released digitally, the mid-tempo "Alting Er Eet" is a bit more rock oriented with full drum set etc. but still rather dreamy stuff. Loving it! Also the following title track that also has cool sitar and percussion rocks out a bit in the Baby Woodrose style with fuzz guitars and a driving beat. Uffe has always had an amazing sense for melody and atmosphere and this album is no exception."Angakkoq" is a deep, melancholic folk piece with beautiful acoustic guitars and organ/mellotron layers etc. I really enjoy Uffe's vocals here. The song apparently tells about some shaman and no wonder. "Lille Fugl" ("Little Bird") is a hazy, dreamy and trippy folk song, just wonderful. Then it's time for some more positive and happy stuff with the Eastern tinged "Floden". We get some more sitar and tablas (?) too and this is yet another winner. The droney and hypnotic "Aldrig Mere Ned" is again darker stuff. The album is finished with the cool little psychedelic folk/country rock piece "Hallo Hallo Frøken" that is a slowed-down cover version of a track originally written by obscure 70s Danish band Hyldemors Grønsaligheder. A great homage to some of Uffe's psychedelic forefathers!

In summary, this is yeat another absolutely amazing album full of Uffe's mind-altering mastery and deep psychedelic wisdom. The sound quality is just perfect for this kind of music and I'm totally in love with each and every track on the album. I can already say that this will be one of the musical highlights for me this year. Just go an get it!