Moonwagon - Zen out of Ten - Live 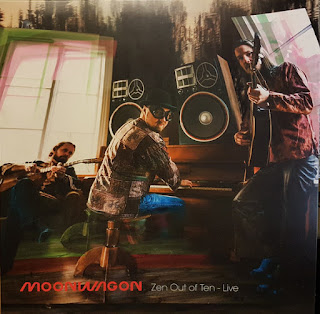 Moonwagon from Kokkola, Finland, is one of our finest purveyors of (mostly) instrumental, progressive space rock. Since they turned into a trio a few years ago, I was curious to find out how the band deals bass, drums, guitar and synthesizers live. In studio, this was of course no problem. I was lucky to catch them alive at Semifinal, Helsinki in 2017 and see how it was done. The bass player and guitarist both switched into keyboards from time to time and they also used some pedals, so no problem. It was  a great show and I also got to party with the guys afterwards. Zen out of Ten is a live album recorded at the very same, dear little live venue at the downstairs of Tavastia Club in the middle of Helsinki but one year later in 2018. I sadly missed that show, so it's wonderful to hear how it went.

The albums starts off with "Starmask", originally from the 2011 album Night Dust. Great, driving mid-tempo piece! There's even a bass solo in there sounding a bit like Alan Davey... Cool! "Forgotten by Time" (from 2015's more jazz/rock fusion inspired The Rule of Three) is a bit more progressive number with some great, adventurous stuff and superb playing by all (lots of more bass soloing too!). The guitar solos are great as well. The longest track on the album is "Shadows Whisper Fire" (from Foyers of the Future, 2012) at nine minutes. I'm somehow reminded of the more atmospheric side of Rush here, alhough without the high-pitched vocals of course... "Saturn Summer" is another great prog tune including the band presentation. The only previously unreleased track "Nights of Neon" reminds me of Rush again and maybe olso Blue Öyster Cult a bit, great prog pop/rock. "South of Bermuda" from 2017's great EP Devil's Labyrinth is the heaviest piece on the album and also has some vocals. You can hear the Hawkwind influences in here I think. One of their best tracks if you ask me! The only track with full vocals (as well as acoustic guitar!) "Run to the Sun" ends the album in a cheerful mode. This is a great live album with excellent production but the vinyl version (including poster and MP3 download code) is limited to just 100 copies so be quick if you want one! Also available on CD.