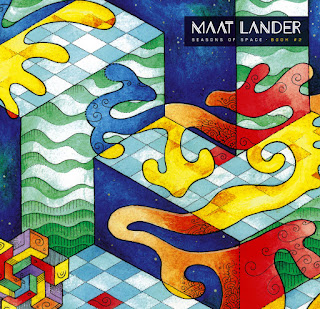 This is the latest album by Russian instrumental musicnauts Maat Lander. The lineup features members of two wonderful bands: Vespero and The Re-stoned and their music is maybe best described as an adventurous mix of psychedelic space rock, prog, ambient, trance and electronic music. Sometimes I'm reminded of Ozric Tentacles, but Maat Lander has a style of their own. Like the previous LP Seasons of Space Book #1 this one comes with a cool illustrated booklet continuing the cosmic sci-fi saga of an entity called Maat Lander. It's very enjoyable to read while listening to this great album!

The album begins with "Realm Of The Firelimbies" that builds up slowly from dreamy ambient into energetic, up-beat space rock. Amazing stuff! I love the guitars (especially the solos!), synthesizers, sequencers, groovy rhythms, everything. "There, Where the Crystal Image of the Whole Space Dwells" is a very cinematic track that sounds a bit like mix Steve Hillage and Hidria Spacefolk. Just close your eyes and let the space visions fill you mind. After the short, semi-acoustic intro "Galaxy Passage #4" we get the album's longest piece "Meteors Serenade". It starts off in a tranquil manner and stays rather relaxed and floating for six minutes. Then it grows and gets more intense with some blazing solo guitar work. Wow! "Klaus, I'm Lost Among the Moleculs" is a nice, bit jazzy and proggy piece. "Quantum Ballad" has a beautiful, mellow and acoustic mood. Now it's time for some serious, ass-kicking and brain-frying space rocking and the fast and heavy "Space Scum" is the track for that kind of action! There are also some more adventurous, jamming parts in there. This is the last track on the limited LP versions (240 black, 130 coloured) but the CD and download have two more tracks: "Galaxy Passage #5" and the free-flowing space/prog/trance number "The Asteroid Of Living Machinery". In summary, this is one of the best albums I've heard for a while and strongly recommended for all lovers of instrumental, psychedelic and trancey space rock.