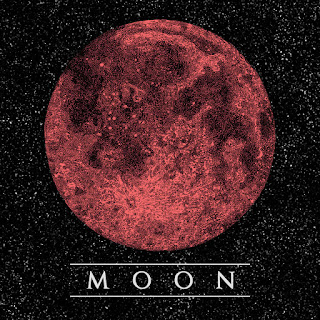 Holy Mountain is a bluesy, rather heavy retro classic/psych/acid rock trio from Oviedo, Spain. Moon is their first vinyl album following a couple of digital releases on Bandcamp. The album was released already in February 2018 but I only recently got a promo copy so that's why this review comes so late.

When you put the LP on you first of all realise thet the sound quality is great and crystal clear. The opener "La Caverna" starts off in a dreamy, tranquil manner but at least when the great solo guitar work begins things get more intense. Towards the end the track also gets faster and groovier and ther is some organ in addition to the standard bass/drums/guitar stuff. This is a great, instrumental beginning for the album! The start of "Birdwax Blues" washes over you like a fresh breeze over the mountain tops, I really like the vibe here. Also there's some organ sound in there too. In the middle the track turns into hazy blues and we also get some piano and vocals. The vocals are not bad at all, but I somehow prefer this band in its instrumental, not-so-bluesy form. Especially the trippy, jamming guitar solo parts are often brilliant. The slowly building, beutiful "Eúfrates" is one of my favourites including lots of that towards the end! Great playing by all members, I must add.

On the B-side, "Preacher" is the longest track on the album at 12:34. Again the band starts off in a peaceful, dreamy mode, but then we get some heavy, bluesy acid rocking. Some of it reminds me of The Outskirts of Infinity, which is definitely not a bad thing. Maybe Jimi Hendrix has been one of the influences for Holy Mushroom as well. Later on there's also some vocals. The album is finished with "Grand Finale in the Blind Desert" and this is one of the highlights for me with its mystical, dark atmosphere. Some great jamming on this one! Holy Mountain is one of the best new band's in their genre so be sure to check out them! The more limited, gorgious looking psych-colour edition of the album is already sold out from the band but you can still get that and the black one from their label.