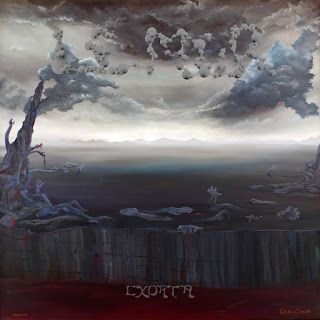 Le Mur is a German band who label themselves as "heavy dark trip rock". To my ears, they sound more like late 70s/early 80s experimental post-punk or industrial rock bands than any of the space/kraut/psych rock bands that I know. But they are still rather heavy, dark and trippy and rock out, so I guess that description is pretty valid! I don't understand how I have not heard of them before since Exorta is already their third vinyl album. They use bass, drums, percussion, guitars, organ, synthesizers and sound effects as well as saxophone and of course vocals.

The album kicks off with the three-minute instrumental "O.m.e.n. - Towards the End". Sounds hypnotic and rather promising. The edgy "Die Nacht der Lemuren ( Teil 1 )" has punky vocals (in German) and after a while it goes into somewhat experimental spheres also including sax. "(Intro) The Broken Pieces of..." has a very melancholic, sad vibe and vocals as well as some spoken word just accompanied by organ and drums. Weird. "Our Doom" is a slow, dark post-punk spirited piece. There are three eight-minute pieces on the B-side. "These Symptoms Are Temporary" somehow brings to mind Chrome without the out-of-this-world-and-high-on-acid element. Still one of the best tracks on the album in my opinion. The title track "Exorta" isn't too bad either, actually pretty hypnotic and mesmerising. There are also some spacey synthesizer sounds and atmospheric post-rock floating. The end part with guitar solo is rather heavy stuff. I like it! The album ends with another cool track "O.m.e.n. - Arisen". I must say the B-side is a lot better than the A-side! Le Mur will perform at the Clostridium Label Night Vol. 1 on 13.4.2019 in Dortmund, Germany, along with Cosmic Fall and a couple of other cool bands. Go and check them out live if you can!