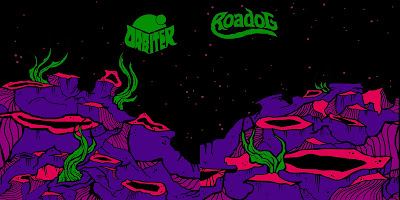 I have always digged the split 7" singles since they are a great, relatively cheap and fast way to get to know new bands. And they are on vinyl and very suitable for DJ use! This little fellow presents two new promising bands in the Finnish stoner rock circles: Orbiter and Roadog. Both bands have been playing together for a few years already but were new to my, anyway.

Orbiter from Helsinki gives us a six-minute, mid-tempo heavy rocker called "Anthropocene". The clean, melodic vocals are maybe closer to grunge than your usual dirty stoner/desert rock bands but the guitar sound is rather heavy and even a bit doomy. This track has a nice, catchy groove that makes you close your eyes and nod your head. I like it! The sound quality is also great. I hope these guys can produce a proper full-length album soon!

Also from Helsinki, Roadog (named after a bicycle) has chosen a lot faster, more energetic and in-your-face title track from their debut CD "Reinventing the Wheels". It has a little bit of Fu Manchu vibe which is cool. This is great hard rock'n'roll for drinking beer and partying! It's a bit short at only three minutes in length but it sure makes you want to hear more.

So in summary, this is a very successful and enjoyable 7" split single by two great new Finnish heavy stoner rock bands so if you are a fa of the genre I'd recommend a fast purchase before these are gone. Personally I'm sad I missed their split 7" release party at Bar Loose but I will for sure catch them live later somewhere along the road. They are playing in Tampere next Thursday, for example.