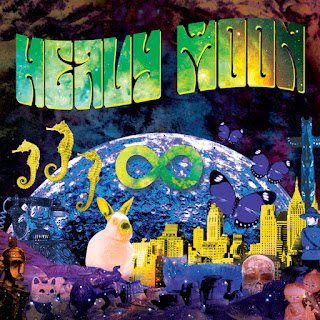 Heavy Moon is a psychedelic space rock project by Jacob Rehlinger from Toronto, Canada. He has also released different kinds of music as Moonwood, King Pong Dub System, Spume and under his own name, mostly on Canadian Arachnidiscs label. This German compilation CD, however, is the first occasion I've heard about him. As the title suggests, this is a sort of "best of" compilation of stuff released on different albums that originally came out 2007-2018. There is also one exclusive track on the CD.

I've got to say I really enjoy Heavy Moon's take on instrumental, psychedelic space rock. Even though everything is played by Mr. Rehlinger himself (I guess), the music has a proper band vibe. I think at least some of the music is based on jams and improvisation, but there are also tracks that are clearly more delicately composed. The overall vibe is rather cosmic and the sound quality is great, so you don't have to be afraid to hear muddy and distorted bedroom four-track tapes. I like the play list on this compilation since there's a good balance in between hard rocking Hawkwind-like tracks and more peaceful, dreamy and mellow pieces that also have have some Pink Floyd vibes for example. Sometimes I'm also a bit reminded of Vibravoid or Electric Orange, but the sound and vibe is still different somehow. Some of the coolest track titles include "Captain Nebulous", "Orbital Drift", "Black Eagle Nebula", "Astrocosm" and the exclusive track "Dieter Visits The Dream Dimension". Great use of electric guitar, synths and organ as well as bass and drums. I wish that this almost 80-minute blast of brain-melting spacey acid rock would also be released on double vinyl but right now this is your best change to get a ticket to outer space.