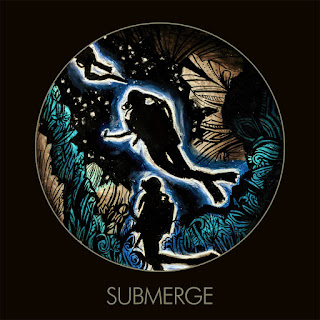 Son Cesano is a new instrumental psychedelic stoner rock band from Switzerland. Submerge is their debut album and was released in December last year on CD, vinyl and digital. It has six tracks, four of them pretty long. The band has a traditional two guitarists, a bass player and a drummer line-up so no keyboards or anything extra except for some percussion by the drummer. The album has a pleasant, emotional vibe and things never get out of hand or too wild of freaky.

The ten-minute title track starts off the ceremonies and I like the riffs and atmospheric melodies on this one. "Cold Sleep" has some heavier riffing but also beautiful, more tranquil parts, very nice. The adventurous "Aberration" is the longest track at 15:41 and has quite a lot stuff going on. The more minimal section brings to mind Colour Haze a bit but at some points they get to almost Sleep-like heaviness. "Martini Effect" is a shorter mid-tempo piece with some cool solo guitar work. "36070" begins in a very mellow way but things get heavier on the journey... Again some Colour Haze vibes can be detected. The album is finished with "Dust Age" that somehow feels like more mainstream rock music, although there's a long, quiet passage in the middle. Submerge is a promising debut and worth checking out if you like instrumental, emotional stoner rock with some psychedelic elements.