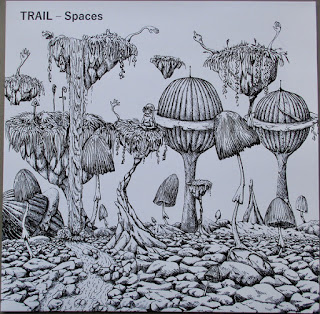 Trail is a new heavy, psychedelic stoner blues post rock band from Darmstadt, Germany. Spaces, that was first relesed on their Bandcamp site as a digital download last year, is their debut album. It was also released on vinyl (three different, limited editions) on Clostridium late last year. There is also a promo CD that I've got. The band is formed by two guitar players, a drummer and a bass player. One of the guitarists also sings on the first track. The tracks on the album have no actual names, just numbers and they don't go in order. Numbers 2, 8 and 9 are on the A side, 1 and 4 on the flip side.

"No. 2" is the shortest at 5:23. It's a pretty standard but energetic and effective, groovy stoner rock number with a bit of 70s vibe. Tight playing by all! The vocals are okay too. "No. 8" is a more atmospheric, instrumental number with some sounds of thunder in the beginning. This maybe comes closer to some of the grunge bands than stoner rock but I still like it. "No. 9" is at first groovier hard stoner rock again but goes into soulful, bluesy territory as well. Not bad at all! It's another instrumental. The over 10-minute "No. 1" is also a cool, atmospheric and sometimes heavy instrumental that this time has more post rock elements but at times is proper heavy stoner rock. One of the highlights. The longest (10:45) track "No. 4" has a more psychedelic feel to it, so of course I'm also enjoying this one. There's some cool guitar soloing towards the end... Tasty! This band might not be the most original in style or really that psychedelic but they know what they are doing and do it well. Check them out!