HEAVY PSYCH SOUNDS FEST READY TO TAKE OVER THE UK, BELGIUM & THE NETHERLANDS!

HEAVY PSYCH SOUNDS FEST READY TO TAKE OVER
THE UK, BELGIUM & THE NETHERLANDS!

London, Brussel and Deventer will be drenched into the fuzz this February!


HEAVY PSYCH SOUNDS RECORDS & BOOKING is proud to kick off further events of their Heavy Psych Sounds Fest-series, which celebrated its latest edition just in November 2018 in Innsbruck, Austria. The Italian cult & fuzz rock label, in cooperation with Poison For Souls, invited high class acts such as BRANT BJORK, GIÖBIA, MOTHER'S CAKE, BELZEBONG & many more, to turn the capitol of Tyrol into a psychedelic rock wonderland! Due to the massive success and participation of the heavy rock scene with fans from all over Europe who made the fest so special, HEAVY PSYCH SOUNDS is getting ready to expand and will be running the highly acclaimed events also in LONDON (The Borderline), BRUSSEL (Magasin4) as well as in DEVENTER (Burgerweeshuis) between February 22nd - 24th 2019!

Beside killer acts such as BLACK RAINBOWS, GIÖBIA, DEADSMOKE and many more, the London date will also see the release show of DEAD WITCHES (feat. Electric Wizard's co-founding member Mark Greening) to celebrate their sophomore album 'The Final Exorcism! Expect heavy as hell shows from all bands, the finest and almighty riffs, and of course lots of cool merch at the Heavy Psych Sounds booth. Be quick to purchase some of the last available tickets, as the exciting band line-ups look as follows: 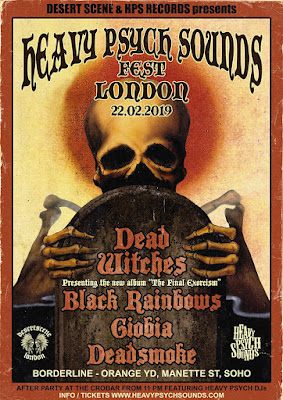 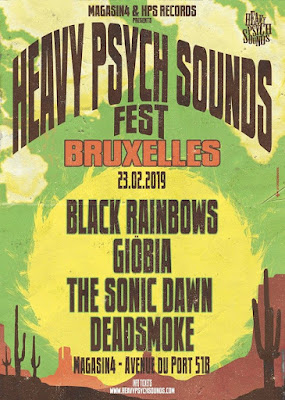 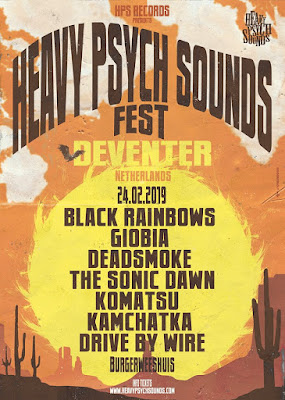