The Spacelords - On Stage 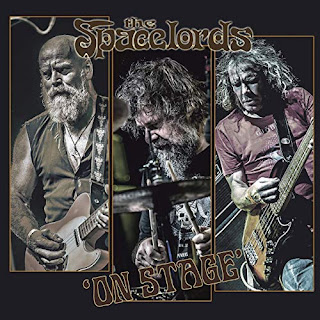 This German psychedelic space rock trio just keeps on getting better and better... This marvellous sounding double LP (the CD version was withdrawn due to slight mastering error) is their second live album and oh boy the band is on fire. I have to say that on their first releases (2010-2013) the band was possibly still finding their own way to make psychedelic music but since Synapse in 2014 and especially since Akee Kazmaier replaced the previous bass player Klaus Werz after that the band have really found the right spot. At the moment they are without a doubt one of the best instrumental psych/space rock trios in Germany, if not in Europe or even the world.

Their drummer Marcus also used to play in another superb German psych rock trio Electric Moon and there are some similarities with these groups for sure. Both play trippy, spacey, often rather heavy but as often also dreamy instrumental rock where effects also have an important role. While a big part of Electric Moon's lengthy tracks are very hypnotic The Spacelords might have some more melody and progression, but it still varies. Electric Moon is mostly instrumental, but The Spacelords don't have any vocals at all. Both bands jam a lot, but Electric Moon plays more pure improvisational stuff while The Spacelords have more structured numbers, also on live gigs like this one.

On Stage was recorded at a privat event called Spaceparty in a big garden, more like a park, that was full of amazing plants, art and lights. Unfortunately there are no pics of the actual event, so all the pics in the cover art were taken somewhere else. Anyway, the spirit of this magical garden is well documented in the playing of this very talented and experienced trio. They play with such a vibe and conviction that you almost feel like you were part of the audience while listening to this album. The live recordings have not been overdubbed or anything, so what you hear is exactly as it happened. The recording/mixing/mastering job by Matt Korr is perfect, and even the gatefold vinyl cover is amazingly well done. The six long tracks on the album include renditions of studio tracks from the couple of latest albums Liquid Sun and Water Planet plus two new tracks that I had not heard before. The music of The Spacelords makes me want to just close my eyes and journey to the stars in my mind. It's pretty easy with sounds of this caliber! Do yourself a favour and check this band out if you haven't already. The more limited coloured version (only 100 copies) of On Stage was sold-out on preorder but you might still be able to score the black edition limited to 400 copies. The official release date is apparently 22.2. and I can't find any videos or even sound clips online at the moment.

Edit: I just heard that a repress is coming up!