Elfin Bow & Gary Lloyd - Who Knows Where The Time Goes 7" 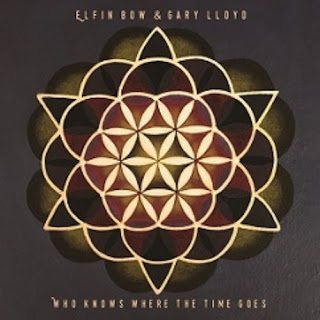 I have never heard of British folk singer/guitarist/mandolin/fiddle player Elfin Bow (real name Elizabeth Kearney) before, but she has released at least one album in 2016. This self-released, eponymously entitled album was mixed and mastered by Gary Loyd, who this time is also responsible for the orchestration and electronics on this wonderful single. The Scottish Session Orchestra is conducted by Adam Robinson. I love Elfin's crystal clear, beautiful voice and the music is superb although not that psychedelic in any way.

On the A side there's an amazing cover version of songwriter and musician Sandy Denny who started her career in the late 60s. Some of you might remember her from her work with Fairport Convention, but I must confess I was not familair with her music before. Anyway, "Who Knows Where The Time Goes" is a very nice, atmospheric and melodic little song and the orchetration makes it even more effective and emotional. Very nice. I must say that I still prefer the Elfin Bow original "The Wisdom" on the B-side. It has a more traditional folky vibe, although also it has some beutiful string orchestration. This is just pure magic, and I also really like the wise lyrics. The open gatefold cover is also great. Check this out!