nick nicely - All Along the Watchtower / The Doors of Perception 7" 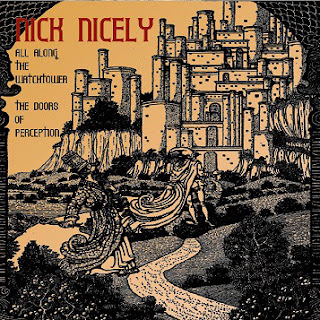 One of the four "end-of-the-year" 7" releases is a new double-A-side single by nick nicely, one of my idols. It just can't be a mere accident that a lot of my favourite artists have been picked up by the label in ten years... nick, who turns 60 this year has been making his own mix of experimental electronic music and psychedelic rock/pop since the beginning of the 80s and he definitely still has the skills to produce pure magical bliss.

"All Along the Watchtower" of course is a cover version of the Dylan song also made famous by Jimi Hendrix. nick makes the song sound like nobody else than himself, as you migh have guessed. You can still recognize it, though. The synths & electronics are mixed in a very cool way with highly manipulated vocals and electric and acoustic guitars. What an excellent job of doing a very trippy, experimental but highly enjoyable version of this stone-cold classic! "The Doors of Perception" is a new original that goes well with the flipside. It has a celestial, mind-expanding vibe that suits the subject matter just perfectly. You don't need psychotropic drugs while listening to nick nicely, his music is a drug on its own! Just close you eyes and let nick take you on a mind-journey, you won't regret it.