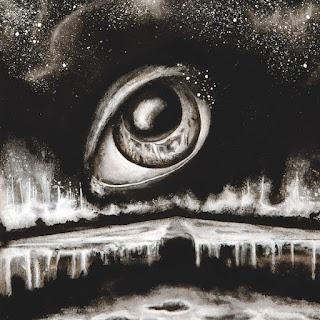 Ufo Över Lappland is a new instrumental psychedelic space rock band from Northern Sweden and a most welcome newcomer to the Scandinavian scene for sure. They are not as heavy or powerful as their Southern space cousins Yuri Gagarin and maybe closer to some hypnotic trance rock outfits. The bass is still pretty heavy and Hawkwind-like! I've seen the band live once at Uleåborg Festival of Psychedelia, Oulu, and enjoyed their show although was not totally blown away. It somehow seemed they were not 100% into it, maybe they were a bit nervous or tired or both, or maybe it was just me.

Anyway, the band released their first tape in 2016 and this LP/CD seems to be pretty much identical to it. One new (?), a bit more progressive track "JaEDeJaE"has been added, and the long, cool spacey jam "Lemmy on the Beach" is only a bonus track on the CD version, just like on the first tape release. My favourite track is perhaps the opener "Keep On Keepin On Space Truckin" that keeps a steady, hypnotic krautrock-like beat going for over 12 minutes. The spacey, windy synth noises  and heavy bass remind me of Hawkwind, but the airy, delayed guitars are closer to modern kraut/psych rock. Towards the end the track gets a bit more intense which is great. "Podzal" is a bit more ethereal and dreamy track with some cool synthesizer work. "Nothing That Lives Has.... Such Eyes" has a bit eerie, otherwordly vibe and I can almost see the UFO's flying through the Northern Lights. Wonderful! The end gets pretty weird and experimental. Too bad that the LP version doesn't have room for the CD bonus track "Lemmy on the Beach" since it is rather intense stuff bringing to mind Hills etc. All in all a very promising debut, I have a feeling the next proper studio album will be a real killer! This album will be released in a couple of weeks so be prepared.