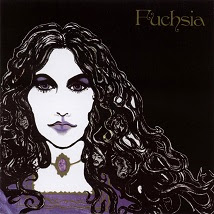 For the first actual reissue album on Fruits de Mer Keith has really pushed the boundaries! Fuchsia's eponymous debut album is one of those legendary early 70s cult albums that dissappeared in the winds of time due to the group disbanding short after the release. Surely it was not the case of just another standard quality band splitting up since the innovative, original progressive folk rock that Tony Durant and his mates put out in 1971 still sounds fresh and magical today. There have been several reissues on CD and semi/un/official vinyl bootlegs as well, but this is the first time the album has been reissued officially on double vinyl with amazing, remastered quality. So,  the release also includes a bonus LP with demos etc. as well as a DVD where Tony tells about the album and what has happened since its release.

The actual album includes the seven original tunes sounding crystal clear and totally spellbounding. I really like the compositions that are rather complex but natural sounding at the same time. In addition to the usual band instrumentation we have strings that give a the music a bit classical touch at times. The music is not that psychedelic but has a strange, very pleasant and magical appeal. Tony's vocals are a bit part of the enjoyment for sure. One of my favourites is "Another Nail"  that rocks out a bit more and reminds me of S. F. Sorrow era Pretty Things a bit. Sometimes I hear echoes of Love and some U.K. acid folk acts, but overal Fuchsia pretty much sounds just like themselves. The longest track "The Nothing Song" is perhaps the most psychedelic and also one of the highlights for me. Wonderful!

The bonus disc has some special treats. The dark and mystical "Somnabulist" is a new recording (yes, Fuchsia has been active again during the recent years and even released a second album!) of a very old song and I really like it. "Rock and Books" is another old song newly recorded and has a more folky touch also including some accordion. Then we've got the original 15-minute long "Fuchsia" demo that got the band signed to Pagasus label in 1970. The sound is a bit inferior here of course, but still totally okay and this historical recording is a joy to experience. Next it's time for a couple of original demos ("The Band" and "Ragtime Brahms"). I especially love "The Band" that was re-recorded for the Me and My Kites with Tony Durant of Fuchsia single released on Fruits de Mer in 2013. Then there's an acoustic version of the Fuchsia II song "Fuchsia Song". The great Swedish band Me and My Kites perfom "The Band" next with Tony and I really like this version that somehow caresses my soul. The album is finished with another Fuchsia II demo "The Waves" that has a bit spooky, hypnotic mood. In addition to the two LP's and DVD fans will also get a marvellous 24-page A4 magazine and a fold-out poster all packed in a glorious gatefold sleeve including lots of notes by Tony himself. This must be the best reissue I've seen or heard this year! It's no wonder the album is already sold-out at Fruits de Mer HQ but check out the best stockists.