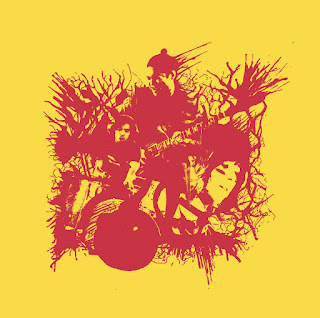 I got the download of this strange album by obscure band from Oakland, California from Bruce Duff of Jesters of Destiny. Like it often happens, I first forgot to download it, and then just forgot it on my hard-drive (sorry Bruce, I still love you!). You might think that a band that Mr. Duff feels passionate about enough to promote to a small, unknown psych blog on the other side of the known universe might be pretty special, and you are right about that.

It's hard for me to describe or label the music that Grex makes. It is experimental and psychedelic, has elements of free jazz, noise pop and art rock and then some. The band is apparently just a duo of Karl Evangelista (gtr, voice, b, misc) and Rei Scampavia (keys, voice, misc) but on this lates offering they are aided by a skillful drummer Robert Lopez. There are also some other friends guesting on various instruments. They have six previous releases on their Bandcamp site, so they have been doing their weird music for some time now. They are also playing live gigs, I just noticed. Might be interesting! The melodic female/male vocals sort of make the music more accessible to "normal" human beings, but sometimes the sounds really seem to come from some other dimension of something. At times the going gets really freaky, wild and strange, but some of it is more like art rock or indie pop with just an odd twist. There are 13 tracks on Electric Ghost Parade most of which are rather short, but three of them are over the six-minute-marker. You can check four of the songs on the band's Bandcamp site and you can also find the album in Spotify. Check it out if you are into inventive, bold and out-of-the-norm stuff!