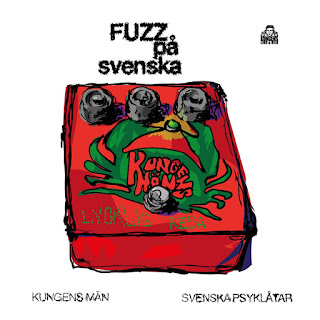 Okay, this is the fourth 2LP by this great Swedish improvisational psych band on Adansonia Records in less than three years. I guess it means that they are loved by the label and record buying fans as well! The long, instrumental tracks of Kungens Män are slowly growers and you need to really pay attention to the mood and vibe to get deep into them. There is a certain respect and admiration for the psychedelic greats of the past, both from Sweden and abroad. Usually their music is rather laid-back, droney and dreamy. The saxophone enhance the jazzy atmosphere, but the band can also get pretty heavy, spaced-out and fuzzy at times. There are elements of space and krautrock in there as well as experimental music.

This limited double gatefold album (also available on CD) has seven new tracks ranging from little over five to over 19 minutes in length. The over 15-minute "Tesen" starts off the action in a slow, tranquil mode. "Starta Gruff" is a heavier mid-tempo rocker with some rather noisy and wild instrumentation. "Fuzz på Svenska" is again a longer piece and has lots of jazzy sax and fuzz guitar. The next number "Centrala Mellanplanet" is a somewhat bluesy drone rock piece that brings to mind Träd, Gräss och Stenar a bit. There is not that much going on but the atmosphere is great. The shortest track "Tung Pedagog" has a groovy drum beat, hypnotic bass, dreamy synth stuff and psychy guitar. "Tung Dialog" is another slow, long and mesmerizing jam that varies in intensity. This will get you to places beyond this world, amazing! The longest track "Ljupt Djud" finishes off the album growing slowly from peaceful ambient to powerful, little chaotic free-jazz freak-out. Very cool! Another killer album by this excellent band, just go and get it.