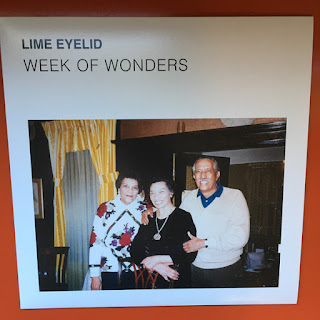 Now this is a weird one... It's been a while since I've received anything this experimental for review, and especially on LP. Lime Eyelid is a one-man kitchen band by Josh Schultz from San Francisco. Josh played everything (drums, e-bow, electric guitar, synth, tape, theremin) into a four-track tape recorder and mixed the whole thing all by himself giving him an relatively unlimited space to experiment and do what he felt like. The end result is rather psychedelic!

There are six tracks on the LP, most are just numbered, but the second track on side A is called "I Saw Waves". That's also the only one with real vocals the rest being more or less instrumentals. Having said that this is weird and experimental, I have to add that it's not unlistenable noise or anything like that but actually totally enjoyable and clearly music with some melody and also slow, hypnotic beat on some tracks. "I Saw Waves" and the following, long "3" actually have some Spacemen 3 vibe in them, but other than that, I'm not reminded of anything else directly. The home-grown, modest sound maybe makes this sound more experimental than it actually is. "4" is the longest piece and almost ambient drone with also some wordless chanting. "5" has a sort of creepy, dark vibe, great! If all this gets you excited good luck finding a copy of this private-press LP since it's limited to just 110 copies.