Superfjord - All Will Be Golden 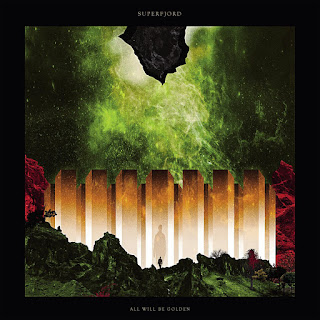 It's been four long years since I reviewed the debut album of then new Finnish psych sensation Superfjord. It Is Dark, But I Have This Jewel was an excellent release and found its way into the hearts of many serious psych rock lovers all over the world. Since then the band has been involved in a couple of split singles on the marvellous Fruits de Mer records, and the cover versions of Coltrane's "A Love Supreme" and Zappa's "Peaches En Regalia" were totally mind-blowing. They have not played that many gigs with several band members also being active in other projects etc., but I have been lucky enough to witness some great, almost spiritual live performances by them.

The band has lots of different infuences from various decades of psychedelic, experimental, jazzy, hypnotic and progressive pop & rock music. They have mixed all these different vibes, sounds and vibes into a fresh, interesting and inviting brew that sounds modern while bowing deep to the musical master-minds of the past. This exactly is their strenght, in addition to great compositions, clever arrangements and superb musicianship, of course! The use of percussion on several tracks brings to mind Santana (or Finnish groove gurus The Hypnomen), the delay guitar on the opener "Cut and Paste" was perhaps first introduced by Ash Ra Tempel's legendary Manuel Göttsching but later used by many fans of cosmic krautrock like Helsinki-based Siinai. In addition to the groove, vibe and texture the music also has some superb melodies. The vocals are mostly used more like a mantra somewhere in the background, they are difinitely not a lead instrument like guitar, synthesizer and saxophone. I really like the solos, by the way! There are also elements of modern electronic (trance) music that I sometimes dislike but Superfjord can handle that too with flying colours. Astralasia, Hidria Spacefolk and Kingston Wall's III came to mind in this respect.

The progressive flourishes remind me of Frank Zappa at times and the sax adds a pleasant, smokey and jazzy element. When the band really let go, they are on fire. Some of the little more relaxed parts will get any Pink Floyd fans to close their eyes and dream. There are no totally chilled-out, ambient tracks this time, though. "Parvati Valley" gives us also some Indian atmospheres without sitar, "Rainha da Floresta" takes us into a whole different trip inside a rainforest. This is absolutely one of the best and most inventive albums released in Finland this year, so be sure to check it out! The official release date is this Friday, September the 21st and the release party will be held at Kuudes Linja on October the 19th. See you there!