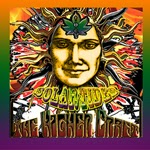 The Higher Craft from the UK has gone through some line-up changes and seems to now focus on highly limited, personal CD-R editions instead of officially released CD’s. This is a 54-minute album (they call it an EP) including mostly new studio tracks, a couple of re-masters and also some live recordings. The track info on the nice looking cover booklet is way too small for us humans to read (probably for fairies only), but I can still make out the track titles. The music is a nice mixture of psychedelic, dreamy and atmospheric soundscapes, folky pagan vibes, space rock and metal. Even some electronic music!
“Solar Tides” starts off things in a mysterious, dreamy way. “Flight Horns” has acoustic guitar and a somehow jazzy vibe. “Travel Unto Thee” starts to rock out more and there’s also some heavy metal guitar and double bass drums. “Can You See in the Dark?” is a short, a bit strange electronic dance song, and “Window in the Water” an acoustic folk piece with dreamy, beautiful atmosphere. I like this one! “My Philosophy (Re-Mastered)” is similar in style but a lot weirder and darker. Another re-mastered track is the wonderful “Gateway, 2nd Movement” that is perhaps the best piece on this release. Nice combination of acoustic and electric instrumentation. “Lunar Tides” is another favourite of mine. It begins in a very spacious, ambient and experimental way but then there’s some soft, hypnotic electronic beat, synthesizers, psychedelic effects etc. “The Receiver (Live @ Alchemy 2012)” rocks fast and hard and has a rather good sound quality as well. Unfortunately the sound quality is not that good on the interesting The Magic Mushroom Band cover “Magick Eye (Live Cover @ KKPDF 2011)” or “Lazy Daisy (Live @ Deep in the Woods 20120)” but the great vibe is still transferred. The disc ends with a short, hallucinogenic narrative piece “Terminator”. Wow! I really wish this band would make another proper album release like The Quest into the SteppingStoneAge masterpiece. The singer Christina Poupoutsi is also preparing her solo album which should be pretty interesting.
thehighercraft.bandcamp.com