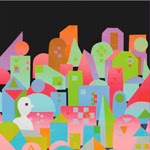 It’s been four year since the latest official Avarus albums IV and Toosassa were released, but there have been a couple of tapes since then. On Salon des Amateurs this Finnish free form experimental psych rock/folk/jazz/electronic outfit is joined by Jeffrey Alexander (electric guitar, Black Forest/Black Sea, Secret Eye Records etc.) from the US and Moritz Kleiner (synthesizer) from Germany. Other players are this time Jukka Räisänen (electric bass), Lars Mattila (electric guitar), Arttu Partinen (percussion), Tero Niskanen (synthesizer). These two, untitled side-long tracks on this very nice vinyl album were both recorded spontaneously at Kunsthalle in Düsseldorf, Germany, on May 30 2011 when Avarus was on their European tour. The sound quality is good and the band is clearly in great and inspirational mood. The A side starts off slowly with some electronic sounds and hypnotic bass line and monotonic guitar while Arttu slowly lets the rhythm grow. The track gets VERY hypnotic and trance-inducing in the middle and you will be transported into this strange, psychedelic Avarus world that only exists during their gigs. On side B they have a nice, almost dub like beat going and even some chord changes, until the track cools down into weird, quiet, jazzy drone. I might not be the right person to review this music since I don’t really know many bands like this, but I think Avarus is a great band and I do enjoy their strange, improvisational aural trips even if they’re pretty primitive, monotonic and whimsical. Or maybe that’s exactly the reason!