Kimi Kärki: The Bone of My Bones 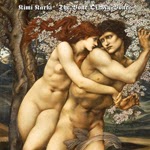 Kimi Kärki is a guitar player who used to play in the legendary Finnish doom metal band Reverend Bizarre as Peter Vicar. After that he has formed a new, international doom metal band Lord Vicar that has become very popular in the doom circles. His other musical projects include prog band Orne (featuring the rest of Reverend Bizarre among others) and cosmic electronic music band E-Musikgruppe Lux Ohr. He is the latest member of progressive indie rock band Uhrijuhla and during the last two or three years he has also begun to perform folk-based music in the classic, acoustic singer/songwriter style. The Bone of My Bones is Kimi’s first solo album and he has some guests helping him out on vocals (Mat McNerney, John Richardson, Anna-Elena Pääkkölä and Pirita Känkänen) and the album was created with the aid of producer Joona Lukala, who has been involved in Kimi’s projects before as well. The mostly acoustic, peaceful, gentle, melancholic and beautiful music has been inspired by the likes of Leonard Cohen, Johnny Cash and Neil Young, but you can also hear some gloomy doom elements as well as 60s/70s psych folk vibes on some songs. The instrumentation is rather sparse and Kimi’s 6 & 12-string acoustic guitars are the main instruments. There’s also some electric guitar on several songs, as well as organ and Mellotron sounds. The lyrics are often very deep and introspective and some of them are based on literal sources and sometime Kimi’s personal dreams.

There are seven tracks on the album. The pretty and simple “I Am Aries” starts off things in very pleasant moods. Mat’s harmony vocals add a great extra layer on the second verse and the female backing vocals are also very welcome. There is also a video made of this song. “Red Rooster” sung by Mr. Richardson sounds more like hippie US/UK folk and also has some nice electric guitar lead work and quiet organ. The vocals sound somehow ancient and wise. Another great song! One of my favourites is the mystical and tragic ballad of lost love and trust including witchcraft, “Young Goodman Brown” that is based on the short story by Nathaniel Hawthorne published in 1835. Some of the vocals remind me of Led Zeppelin’s “No Quarter”… There’s also a bit more energetic part in the middle. “My Name Is Free” is a melancholic and melodic song that has some great acoustic guitar work, deep, retrospective vocals in the vein of Cohen and again some organ and female backing vocals as well as whistling and later on also some Mellotron sounds. Great! “The Lord Who Never Sleeps” starts off with some ghostly synth sounds before the warm, crispy acoustic guitars begin. This song also has some cool e-bow guitar to give it a psychedelic edge. The overall feel is pretty positive and liberating on this one. “Archipelago” is again much more melancholic, sort of mysterious stuff, especially the beginning before the vocals join in just before the two-minute-marker. I guess this is a majestic praise to the sea and archipelago and works very well as such. Mat’s vocals work very well here too as well as the female vocals. Towards the end I’m reminded of the acoustic stuff by Kuusumun Profeetta that I absolutely love. The atmospheric last track “Taxiarch” is by far the most psychedelic and so naturally the highlight for me… This is truly heavenly stuff and an instrumental apart from some whispering and mantras in Latin. What a brilliant and blissful ending for a wonderful album that shows that Kimi is also a master of the acoustic guitar and a fluent, impressive singer. We of course already knew that he can write amazing songs. You can witness one of his rare solo performances tonight at Svart Night #6, Bar Loose, Helsinki, along with Seremonia and Domovoyd, two other marvelous bands on Svart Records. I will be there for sure!