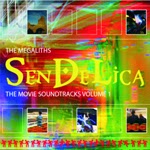 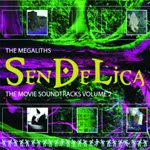 Welch psych/space rock band Sendelica has from the beginning been interested also in films and making soundtrack music, so it’s only natural for them to release an album full of music used in movies. And they sure know how to create atmospheric, spacey and floating soundscapes! The standard version of The Megaliths – The Movie Soundtracks Volume 1 & 2 is limited to 200 numbered copies and includes two discs and well over two hours of music. The earliest stuff included was recorded in 2008 to Grant Wakefield’s art house movie “Sleepwalker Fever”. This gave the band the possibility to “explore more ambient & chilled out landscapes”, and they have continued on that path as well as keeping on rocking. Since then, they have recorded soundtrack music to three more movies, “Trillian Eight” (2010), “Ritual” (2011) and “When the Rising Apes Meet the Falling Angels” (2012). Most of the stuff herein has not been released in audio format before. There is also a very limited (just 25 copies!) 3CD version that comes in a cool box and also includes a build-it-yourself Sendelicahenge megalith model! This is sold-out already, of course… You can also just buy the digital version from the band’s Bandcamp site.

The album begins with a version of “Maggot Brain” by Funkadelic entitled “Return of the Maggot Brains”. This starts off with strange swooshes and narration, and then we have the much loved, simple but beautiful guitar chords and very nice solo guitar work. We also get some psychedelic, effected spoken samples later on. This is a rather different version than the one Sendelica recorded for the Fruits de Mer 7”. I love it! “To Create Is Divine” is another peaceful, heavenly ambient piece that turns into sort of soft dub and also has great, jazzy saxophone. “Mr. Floyd Walker” is very dreamy and floating at first, but there are also some electronic elements later on. “Possessor of Your Heart” is a bit shorter (just 7:39!) experimental ambient track with jazzy sax and “Sun of Sunfaded” a pleasant, sunny and positive piece with soft drums, bass, pretty guitar and saxophone. “Trillian Eight” is an almost 30-minute megalith that starts off very slowly. There’s a lot of different, experimental, strange but lovely stuff happening in this one… Psychedelic bliss. “Arizona Beginnings” is a more song-oriented, peaceful and pretty track and “Soundscape in G”, as you might have guessed, a more droney affair. “Sketches of Cardiza” has a slow, nice bass line, quiet guitar and some more moody sax. Very small-scale but enjoyable. “I Don’t Wanna Be Your Satori” is very quiet at first but it grows a bit along the way into hypnotic, mesmerizing haze. The longest track on this compilation is the 31-minute-long “When the Falling Angels Meet the Rising Apes” that is also the track that rocks out the most. There’s a steady drum beat going on and lots of guitar jamming. After ten minutes the track cools down into laid-back ambient for a while, and then we get some bluesy freak-outs until things get peaceful again. What a wonderful way to end this marvelous, laid-back and floating release! If you are a fan of the more ambient Sendelica stuff this release is definitely for you.