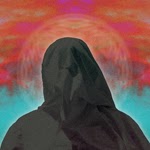 Glasgow-based psychedelic space rockers The Cosmic Dead have been big favourites here at Psychotropic Zone for a few years now. I’ve also been lucky enough to see them live at Roadburn Festival and Liverpool Psych Fest, and both times the band was very successful in totally blowing my mind. Pigs X 7 is a new band from Newcastle that I had not previously even heard about. They maybe have a bit more punky and experimental touch than TCD but are very well suited to be included on the same LP with them.

There is one, massive, over 20-minute track by each band. On the A side TCD performs a very hypnotic but also groovy track called “Djamba”. A 10-minute live version of this track has been previously released on the Live at the Note tape (now when do we see a vinyl version of that?), but this is pretty different and twice as long so it doesn’t matter. The rhythm section lays down a mesmerizing but surprisingly groovy beat while the guitars and synth create a hallucinogenic drone on top of it. This is instrumental stuff as usual, but there are some spoken words in the middle to enhance the highly psychedelic, trippy vibe. Things get a bit more intense towards the end, especially in the drum department, before the track dissolves into million little sparkles in the end. This is an excellent, atmospheric and spacey track that will get you “out there”! On the flip side, “The Wizard and the Seven Swines” starts to rock out almost right away with a heavy, punky and repetitive mid-paced guitar riff and pounding rhythm section. The rough vocals join in shortly. Is this some sort of kraut punk? The simple but very effective chorus is closer to stoner rock. There are also some more new, rocking sections and slower, even noisy parts to keep things interesting for over 20 minutes. This is not overtly psychedelic or spacey but energetic and I do like it. This limited album comes on nice transparent purple vinyl and will probably sell out rather soon.