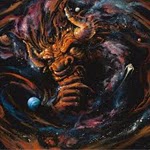 Dave Wyndorf has been flying his heavy, psychedelic stoner rock space machine Monster Magnet since the late 80’s through open spaces and asteroid belts. He has had his personal problems and hard-ships like we all, but luckily the band is in great shape again and Mr. Wyndorf seems to be healthy, creative and full of power again. I’ve been a fan since the early days, so it’s a great pleasure to say that I think their new album The Last Patrol is very likely the best since Powertrip in 1998. It might even be better than Powertrip or the previous album Dopes to Infinity, but it’s too early to tell for sure. Dave and the boys have sort of returned to the roots of psychedelic, heavy stoner experience but along with the knowledge and experience gathered throughout their long space flight. The most commercial pop melodies have been dropped off, and the music pretty much focuses on what’s always been the best thing about Monster Magnet: the deep, hypnotic, mind-blowing and hallucinatory feel of hard 70’s styled stoner rock. Okay, there’s some blues, some acoustic parts etc., but most of the album just blows your mind like it should. And I think it’s really good to have also some more atmospheric sections with Mellotrons, percussion and stuff just to build up the tension again until your mind explodes.
The new album has nice tracks; the deluxe edition has two bonus tracks as well. The album is of course out also on four different, very cool looking limited 2LP vinyl editions that also include the bonus tracks. My favourite songs are the over nine-minute title track that has some of the most effective, mind-crushing riffs I’ve heard for a while, the slow and heavy “Three Kingfishers”, the fierce and energetic space rock blast “Mindless Ones” and the equally fast and furious “End of Time”. All the songs are winners, though, and the playing, singing and production are all top-notch. I especially enjoy the fact that there are lots of spacey reverb, delay and other effects on lot of songs which makes this album a pretty trippy experience. Dave’s vocals and lyrics are also excellent. This is definitely a back-to-form album and I think that everyone who used to like the band in the 90’s should really check this out. The Last Patrol rocks! The band is starting a long US tour soon for the first time in 10 years, let’s hope that everything goes well and that we will see them touring Europe again next year. Personally I’m really looking forward to see some of the new songs live!