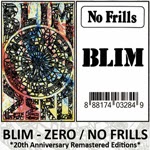 Blim was a British psychedelic and progressive space rock band in the early 90’s strongly influences by Gong, Here & Now and Ozric Tentacles among others. Some of the members later founded the great heavy psych/space rock band Omnia Opera that released some stuff on Delerium Records. Their spacey and instrumental music has lots of similarities with other free festival bands that started around the same time, but they still seem to have a sound of their own, especially on the second, more experimental and stylistically varied tape. They released just two tapes which was quite normal at the time, and those tapes have now been reissued in carefully remastered form on this nice double CD that also has some bonus tracks. The music of Blim was mostly instrumental.

Zero was recorded at Squalor Studios, Kidderminster, UK in 1992. I really like it’s spacey, progressive and psychedelic vibe and band is on fire. I mean, these guys could really play already in 1992. Especially the soaring guitar solos are really awesome. Most of the tracks have lots of keyboards and spacey effects & space sounds. There is a strong Gong vibe on several tracks and it’s emphasized by the great saxophone. There’s also some flute to add some prog and even folky feel at times. The music often rocks pretty hard, but there are also some laid-back, floating moments as well as majestic, uplifting sections “Echo-Logical” sounds quite a lot like the Ozrics or Steve Hillage with its delay guitar and danceable beats. “Hoffman Bike Pump” is rather funky and jazzy. I’m really amazed that nobody put this out on vinyl back in the day, since this truly is that good stuff! The three, sort of funny, more anarchistic bonus tracks also have vocals but the sound quality is not as good as on the main tracks.

I guess that on No Frills the band wanted to go forward from the Gong/Here & Now style, and there’s lots of different, weird stuff going on. The funky and experimental going on “The Noup” reminds me of the American band Primus, but I don’t know if these guys ever heard their music or not. The music has gone into more progressive, experimental and just plain weird direction. There are still some psychedelic and spacey parts in there, of course. The airy and groovy “Ocean” is a very nice track, for example. The funk/jazz/fusion elements are the strongest on a track called “Sparceley & Much” that sounds a bit like Zappa or 80’s King Crimson as well. There are also some dub influences in there too. The longest (12:56) track “Beejayone” is one of my favourites, mainly because it doesn’t have that much weird funky stuff on it. This disc has four bonus tracks that vary in between ambient, psych rock and weird experimental stuff. I must say that I prefer the first tape, even though No Frills might be the more ambitious of these releases. This new 2CD is a very welcome addition to any 80s/90s UK psych/festy collection and a must-have to those of us who have read the Adrift in the Ether: The Current State of the British Underground book by Christopher Williams as thoroughly as I have.