Sabbath Assembly - A Letter of Red 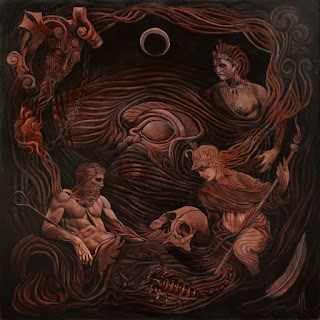 Sabbath Assembly is an American occult rock band based in Texas and New York. I've been following their career since the debut album (Restored to One, 2010) and their gig at Roadburn 2013 was one of the highlights for me. Their original idea was to play the hymns of the Process Church of the Final Judgment, an Apocalyptic religious sect from the late 60’s U.S. That's what they did for the first few rather psychedelic albums that I really love. They have gone through several line-up changes including different female singers (Jessica from Jex Thoth being the first one). The music has also changed more into metal (especially on the previous album Rites of Passage) as the band has also written more original material in the spirit of the Process Church of the Final Judgment.

A Letter of Red is their seventh album and a good mix of both heavier hard rock and more atmospheric stuff. The album is opened with "Solve et Coagula", a cool mid-tempo hard rocker. It also has a beautiful, melancholic part where vocalist Jamie Myers shines. "The Serpent Uncoils" is a doomy and dark number that also rocks out. Another killer track! The heavy and somehow oppressive "Worthless" gets more progressive and has some excellent solo guitar work among other things. "Weighing of the Heart" is a lighter, slow and atmospheric piece. Then we have one of the highlights "Ascend and Descend" that is cool progressive heavy metal tune just like the next song "Hymn of the Pearl". The track I really am in love with is the beautiful, acoustic, magical "From the Beginning". Another favourite of mine is the last, long (7:51) and magnificent "A Welcome Below". This is a very emotional, atmospheric, epic and deep ending for this great album. Sabbath Assembly definitely is one of the best bands in the occult rock/metal genre and also fans of progressive metal should check them out. The band is on tour right now and will play three gigs in Finland this week: 16.5. at TVO, Turku, 17.5. at Bar Loose, Helsinki (with Dj Astro!) and 18.5. at Torvi, Lahti. Go and check them out live as well!