Psychic Lemon - Live at the Smokehouse 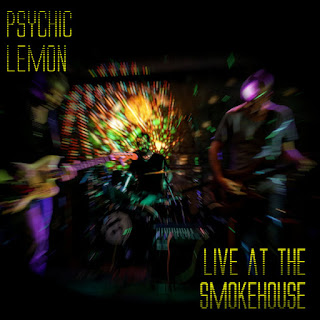 This is the third LP by UK instrumental psych / space / krautrock luminaries Psychic Lemon. I have tremendously enjoyed their two studio albums (S/T 2016, Frequency.Rhythm.Distortion.Delay 2018, read my review) so I was really excited to hear about a live release. The fact that this ridiculously limited (just 300 copies) gorgeous splatter vinyl sold out on pre-order in 48 hours is a good indicator how well received the band is in the psych rock circles. The album was recorded live at The Smokehouse in August 2018. There are only three guys in the band (Andy Briston - guitar, synth, loops, Andy Hibberd - bass and Martin Law - drums) but that's enough to make a riot.

The album features five long tracks. First they play the energetic B-side of the second studio album: the heavy, ten-minute blast "Interstelar Fuzz Star" is a perfect opener to get the audience wonder what an earth just hit them and "Satori Disko" offers a bit more mystical, hypnotic background for some fuzzy wahwah guitar freak-outs. It turns into "Hey Droog!", another powerful cut from Frequency.Rhythm.Distortion.Delay. The intensity levels get close to Gnod here. You can also hear some The Heads influence which is never a bad thing. Great groove as well! Then it's time for a new track called Jonny "Marvel At The Milky Way". At least it's not on their albums. It's an epic, spacey mind journey that goes on for eleven and a half minutes. Sort of brings to mind some of the more laid-back, long & trippy Vibravoid tracks, excellent! The album is finished with the very Hawkwind-like, fast & pounding space rocker "White Light" and I must be in sonic heaven. Another new piece, apparently, and I love it. Lots of energy. Okay, so no tracks from the debut album, maybe because it was a bit different (more proggy?) stylistically. Listening to this album makes me really want to see Psychic Lemon live but at least I can now enjoy this very cool LP. There's also an eight-page booklet to go with it. The vinyl might be quite hard to get but I guess there will be a reissue sooner or later. But the CD is available at a reasonable price from the band's Bandcamp site or you can of course just go for the digital download if you prefer.