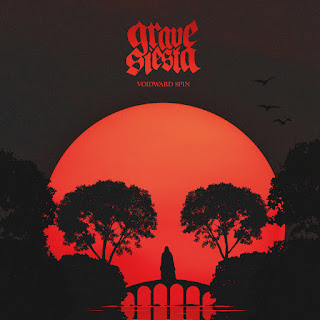 I've been aware of this Helsinki, Finland based doom/sludge/heavy metal band since their self-titled debut CD released in 2011. Back in the day they also had some stoner rock vibes, but on this new album those have been pretty much exchanged for death metal influences. Like the previous, self-released album Piss and Vinegar (2015) Voidward Spin is only out on vinyl and digital download, and that's the way to go if you ask me. I got to say I don't really follow the metal scene nowadays, but I can hear some similarities with old doom/death metal bands like Dream Death and Celtic Frost and Triptykon are definitely big heroes for Grave Siesta. The vocals are now mostly pretty raw and screamed which suits the heavy and sort of brutal music just fine. The band also has sense for melody and finer arrangements which is cool.

There are eight tracks on the LP. There are also some more melodic vocals in there like on "Intolerance" that sort of brings to mind Reverend Bizarre, so it's not all pure sludge, death and gore. The longest track "Weakness" is also the most atmospheric and has even clean vocals. After the long, peaceful beginning the heavy boogie starts, of course. There are also some cool guitar solos which I always enjoy. The songs are varied and interesting enough for me to enjoy the album as a whole. The production is also very good, no complaints. All in all, a great mix of doom, sludge, death and heavy metal and if you are a fan of those genres I recommend to check out Voidward Spin. Available from their record label, for example.