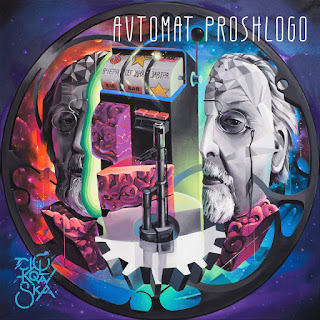 Ciolkowska is a Russian band that has been described as psychedelic space rock. Personally I don't actually agree since they don't really have much common with bands like Hawkwind. To my ears they mostly sound like modern experimental, progressive post-rock, like so many other Russian bands. Avtomat Proshlogo is Russian for Automat of the Past describing the cause-and-effect law or Karma. It is already their seventh release if my counting is correct, so they have been around for several years and played a lot together which you can hear in their full, fine sound. The often melodic, gentle vocals are is Russian which works okay for me. There is also lots of pure instrumental stuff.

Most of the music is rather airy and atmospheric with effected guitars, horns etc. but they also get heavier when needed. After the short intro there are eight tracks ranging in length from five to over nine minutes. I think I can also hear some World music influences, for example on the song called "Okolo Togo". Especially on "My Iz Dzhaza" the band gets very jazzy too. Rock/jazz fusion lovers will dig that. The longest, last track "Pro Gospoda i Buddu" is an udUbrenje cover and very jazzy ambient. My favourite track is perhaps the hypnotic, slow and quite heavy "108". In summary, this is a relatively pleasant, enjoyable album although not exactly to my taste. And I would not call it psychedelic space rock. If you are looking for that in Russia go for Maat Lander, Vespero, Polska Radio One, Cosmic Triggers or Cosmic Letdown. If you are looking for modern jazzy, proggy post-rock, then Ciolkowska will do the trick.