One of Hours - When You Hear The Music, It's Yours 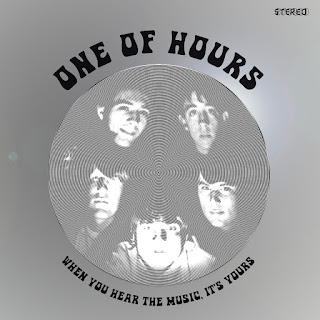 One of Hours was one of those experimental mid/late 60s psych rock bands that only released one or two singles and then nothing was heard of them since. This quintet was from Lexington, Kentucky and released two singles on Chetwyd Records in 1967. After the singles the band went into studio to record a full-lenght album to be released in 1968. They had great material and used all kinds of weird studio techniques in an innovative and truely psychedelic manner. Unfortunately Liberty decided not to sign the band after all and the band soon disbanded. The original master tapes were lost in a warehouse fire, but luckily first genaration copy survived so we now in 2019 finally have the album on LP and CD!

There are 12 rather short songs on When You Hear The Music, It's Yours. The closest comparisons I can think of are maybe West Coast Pop Art Experimental Band, United States of America, Ultimate Spinach and and the softer side of Fifty Foot Hose. Most of the songs are rather atmospheric and laid-back with cool melodies, piano, organ, harmony vocals etc. Even then the weird sound effects add a mind-melting layer. The title track that opens the album is a good example of this. Some of the songs with fuzz guitar rock harder like the Jefferson Airplane/Iron Butterfly styled "Mother Said" and "Cry". At times the going gets rather weird and experimental indeed so no wonder Liberty Records was too scared to sign the band... I often find myself smiling with the odd sounding experimentation but it's just because I'm enjoying the ride! The songs in themselves are very good, sometimes even excellent. There are some bluesy influences in there as well as pop of course. All in all, this is must-have for all experimental 60s psychedelia lovers.