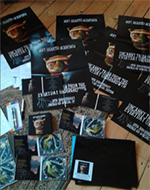 The Welsh whimsical psych folk/indie rock masters The Soft Hearted Scientists have been releasing stuff for over ten years now. I first got to know them through the marvelous Fruits de Mer Records who put out the What Ever Happened to the Soft Hearted Scientsts compilation double LP + 7" EP in 2013 and I was almost immediately in love. I say almost, since I think at first the band's music sounded just simple and accessible, although enjoyable, melodic and slightly psychedelic, but when you listen to their stuff enough, you realize how brilliant the simple, often repetitive song structures are and what kind of amazing atmospheres the band is capable of creating. The lyrics tell us very cool stories that are big part of the music and the overall mood. Their music is usually quite relaxing, dreamy and atmospheric, and has been compared to The Byrds and Love, and maybe there's some similarities at least on the melodies and harmonies.

Uncanny Tales from the Everyday Undergrowth was originally released in 2005 and includes the band's three first EP's. This new expanded double CD set also has demo versions of all the tracks on the second disc, which is very interesting. I was only familiar with the tracks that were included on the previously mentioned 2LP, like the magnificent opening track "Mount Palomar" that always gets the chills going through my spine, it's just so good and effective. "Brother Sister" from Bethesda EP should have been a huge radio hit, it really works very well. "The Yongy Bongy Bo" is a wonderful acoustic-driven folk song that has a nice, whimsical children's music vibe to it, like several other tracks too in fact. They also go into a bit more scary landscapes with tracks like "The Haunted Song". There are some brilliant tracks here I had not heard before, like "Many a Monster", "Isabella (Keep Riding the Road to the Sea)" and "Midnight Mutinies". My favourites still are "Mount Palomar" and "At Night the Quarry Glows like a Mothership", pure magic. The demos show as how the tracks have progressed and don't worry: they have been properly mastered and sound very good too. The band is selling a highly limited, deluxe edition of this set, but there are only a few copies left so hurry up. There are only 300 copies in existence altogether... I'm also really looking forward to the the brand new studio album Golden Omens that should be out soon. What a wonderful band!