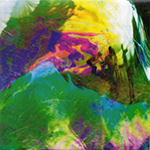 Psychedelic late 60s/early 70s styled psych folk rock/pop is alive and well in Sweden! It seems that great bands pop up all the time. When you investigate further, you'll notice that some of the same musicians are involved in numerous bands and projects... A very active, productive and dedicated bunch of hippies! Anyway, Me and My Kites is definitely one of Sweden's best psych folk/pop bands that have released music so far. I really loved their debut album Like a Dream Back Then released in 2013, as well as the 7" with Tony Durant of early 70s folk legends Fuchsia (a huge influence on Me and My Kites, named after a Fuchsia song!) and the very limited 7" lathe cut split with The Soft Hearted Scientists.

Is It Real or Is It Made? was released already last year, but I only recently got a vinyl promo from David Svedmyr who sings and plays guitar, Mellotron etc. Other musicians involved are the beautiful-voiced Lisa Isaksson on voice, flute, harp, cello and saw, Johan Svedmyr on drums, shakers and tambourines, Mikael Lennholm on voice, guitar, flute and ring modulator, Simon Svedmyr on voice, bass and cello and Karin Engqvist on voice, piano & organ & some special guests.

Side one is composed of nine short, wonderful pieces starting with "Psykjuntan" that is a festival these young Swedish hippies put together every summer. I've always liked to get there! Very melodic, emotional, and brilliantly arranged songs with varied instrumentation, some more based on piano and pretty fragile. It's great that there are so many people singing, I love the vocals! I'm sometimes reminded of Renaissance, so there are lots of progressive elements in there too, "Say It's Real" is a great example. This is perhaps not just as psychedelic as the debut album but very adventurous and fresh sounding stuff. One of my other favourites is "Porcelain" with its excellent melodies. On side B, there are four longer tracks. "Narcissus" is a wonderful prog pop piece, "War" a bit faster and more progressive, and "Curse" a rather pompous and marvellous stuff. The album is finished with the amazing "Common Life", that has several different parts and the mood changes from melancholic to happy and back again. Excellent! All in all, this is a great album that needs a few listenings before you really get inside but offers a lot of new worlds when you give it some time. The band is also looking for gigs in Finland this summer, let's hope that works out...