Bari Watts - There Was a Time 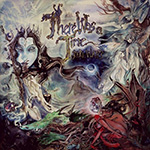 There Was a Time is the second (official) solo album by guitarist/singer Bari Watts who most of us know as the guitar hero form the excellent U.K. neo-psych/classic rock group Outskirts of Infinity. He has also played guitar in the live lineup of The Bevis Frond with his good old friend Nick Saloman, who was also part of making this this album, of course. To me, Bari has always been one of the best Jimi Hendrix styled solo guitarists, but one of his personal heroes is also Marc Bolan and Tyrannosaurus Rex. I will let Bari explain it himself (from the CD booklet): "The songs on this album are my own personal homage to the music and talent of Marc Bolan, Steve Pergin Took, Mickey Finn, Steve Currie and Bill Legend, and also to Tony Visconti, for his empathy and technical wizardry in creating the sound of both Tyrannosaurus Rex and T. Rex." Rather than recording cover songs Bari wanted to try to create his own songs in the same spirit as Tyrannosaurus Rex, and I must say that he has succeeded very well. He sings, plays guitars & Moroccan clay drums, keyboards, bongos & African talking drum. Nick plays sitar guitar on "Magic Hurdy Gurdy Man", and his The Bevis Frond companions Ade Shaw bass and clavinet and Jules Fenton drums. Jeff Dexters offers some spoken word on the title track that starts off the record. So welcome to the magical world of wizards, dragons and unicorns!

The CD includes fifteen rather short songs, the shorter ones being under two-minute and the longest bit over four-minute in length. Most of the songs are based on acoustic guitar and percussion and are rather folky in style, as you might have expected. Of course, Bari's excellent, very "Bolanisque" vocals are playing an important part, as well as his lead guitar and keyboards etc. Some of the tracks are happy and uplifting, but we also get melancholic, deep and touching songs with soulful melodies and atmospheres. I bet some people could easily think this is some recently discovered, previously lost Tyrannosaurus Rex album, the vibe really is that authentic. Several songs towards the end are more rocking in the early, original glam rock style, so more T. Rex I guess, and we also get some soaring, fuzzy solo guitar work. I got to say that it was really great to have a new album by Mr. Watts, and I'm sure the fans of Tyrannosaurus Rex will appreciate his creativity and hard work on this one. Personally, I'm really looking forward to the new Outskirts of Infinity live album recorded at Roadburn 2009 and two U.K. gigs... Sadly their bass player Terry Horbury (also in Vardis) passed away in late 2015. R.I.P. Terry, you will be missed. There will be a Memorial concert for him at The Leather Bottle in London on his birthday this Saturday, so if you can make it, please do.

You can buy There Was a Time CD (there will be a vinyl issue with bonus 7" on Black Widow Records later on!) from all over the place like Amazon, and even order it though Recordshop X in Finland. Go and get it! And if you are not familiar with Outskirts of Infinity or Bari's previous solo work, make sure you check them out at his Bandcamp site.