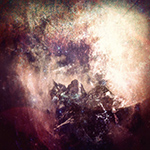 This is the second vinyl album release by heavy and spacey psychedelic solo artist Benjamin Kantschieder aka Kanoi from Austria and a huge improvement to his already very promising debut I reviewed last year. As always on Clostridium, this is a highly limited edition and comes with very cool open gatefold cover and an arty, spacey booklet with lyrics. The package really looks very nice! The previous album was more or less a compilation of older stuff Benjamin had released digitally, but this is all new stuff I think, and everything sounds just wonderful!

The album kicks off with the slow "Naeco II" and it has a floating, dreamy vibe that I like very much. Acoustic guitars, string synths and soft vocals along with electric led guitar, bass and drums. The bit bluesy track gets heavier later on, and leads to the the stoner/hard/blues rockin title track. Things get more ethereal again on the beautiful "Wind Child" ballad that somehow brings to mind early 70s Pink Floyd or softer Porcupine Tree. Excellent! Side A ends with the bit more more powerful, post-rock like and hypnotic "Song of Distance" that has a softer, dreamy and even pop like side to it. Sublime!


B side starts off with another semi-acoustic, soft ballad called "By the Sunrise". Very nice, and some Pink Floyd vibes again. I must say that I really prefer the dreamy, soft Kanoi tracks. The track smoothly transforms into a bit more progressive and experimental short instrumental "Quokka", a sort of reprise. The album is finished with the long "A New Beginning and the Sprawling Sky", parts of which were recorded live with a drummer and bass player. Another amazing, trippy and atmospheric masterpiece! I relly advice you to check out this album even if you didn't like much the previous one From the City to the Stars as this one really is much, much better...