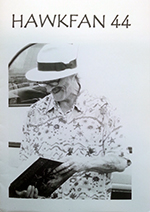 The latest issue of Brian Tawn's Hawkwind fan magazine Hawkfan is #44 and was published in December. Most of the issue is dedicated to Dave Brock's surprise birthday party organized by the fans with help from a few insiders. On August the 16th, four days before Hawkwind's captain would turn 74, there was a money raising event for Dorset and Somerset Air Ambulance at the Royal Grosvenot Hotel, Weston-Super-Mare, and Dave had promised to open the event and the band would also play there in their free-form alter ego The Elves of Silbury. That was a perfect opportunity for the Hawknerds to show their love to the Captain, get together, enjoy some great music and party.

A lot of fans had written a short text explaining what Dave and the music of Hawkwind ment for them, and Hawknerds activist Sam Kirwan had edited and produced a big book out of those as a birthday preset to Brock, and there was for example a magnificent cake, see a picture below... 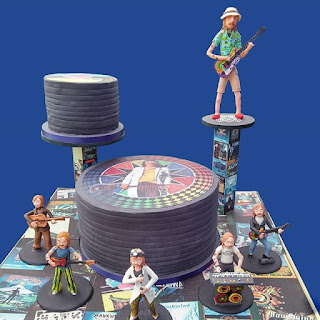 You must read the mag to get the full picture of this warm, friendly and for sure fun event, I only wish I could have been there with other fans... In this issue, we also get Damnation Alley with some info on the recent Hawkwind releases, this time including only reissues and bootlegs, but very useful in any case. Great!

As always, you can get your own copy by sending Brian £1.80 within the UK, £2.80 to the rest of Europe and £3.50 outside Europe by Paypal to briantawn@aol.com. Warmly recommended for all Hawkfans out there! Also, check out the Hawkfan group at Facebook.