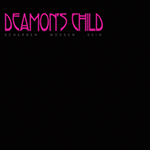 Daemon's Child is a German band playing noisy punk/stoner/metal And this is their second album. The lyrics are in German, which might be a problem for some non-German speaking music lovers, but to me the rather aggressive female vocals sound just fine for this kind of music. It's just the music that's not really for me, in this case... I liked "Venus" on their demo EP a few years ago, and they've got lots of energy and attitude, but somehow I just don't get too excited about this kind of noise/punk/stoner/metal hybrid. This kind of music mostly just makes me nervous. Most of the tracks are pretty hard rocking and powerful, some very fast too. One of the highlights for me is the fourth track "Geld" that's instrumental apart from some whispering later on and creaming towards the end. There are also some more experimental/technical elements in some tracks. "In Kinderschuhen" has just some funny human voice for two minutes, and the last track "Nichts" is a ten-minute heavy stoner punk jam. Not a bad album, just not for me. The album will be released on 26th this month. You can listen to the opener "Das Vogellied" over here.