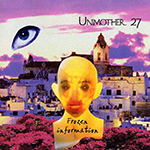 Unimother 27 is a one-man band of multi-instrumentalist Piero Ranalli from Italy. I have reviewed Grin, one of his first CD's for the original Psychotropic Zone years ago. On this brand-new album he is aided by Mr. Fist on drums and percussion. Whether or not Mr. Fist is a real person or not I don't know, since all the drums and percussion sound programmed like before. I sometimes have issues with programmed drums, but they sound okay here. The mostly instrumental music of Unimother 27 is a cool mix of experimental, psychedelic, kraut and space rock, and it's done in an exciting and talented manner so of course I like it. Even the sound quality has progressed a lot during the years, although I have a strong feeling that this was all made in a home studio.

The opener "Moksha (to Huxley)" starts off with some mystical sounding keyboards, and pretty soon it gets moving in a slow, jammy mode. The great, twin fuzz guitar soloing reminds me of The Bevis Frond or Outskirts of Infinity. Later on the beat gets more intense (think Pressurehed etc.) and the soloing just goes on until the peaceful mood of the beginning returns. Nice! "Dancing Thought" is more experimental, progressive and also faster stuff. I'm getting some later King Crimson vibes here for some reason. The almost eight-minute "The Obvilion's Cage" begins slowly and in a weird manner and stays pretty experimental and odd for the whole duration. "Clear Light Healing" has an ambient intro but starts rocking later on. This one also has some very psychedelic, manipulated vocals... Weird stuff for sure! My favourite on the album is the hard rocking kraut/space rock piece "For Mad Stray Dogs Only" that really gets the adrenaline pumping in your veins. Sounds a bit like Hawkwind, Helios Creed or Chrome! "Hymn to the Hidden God" is at first a more mellow, experimental and strange number that also reminds me of some of the Chrome stuff, although it gets going and the solo guitar work sounds more like Nick Saloman or Bari Watts again. The last two minutes are weird, more minimal and mellow going. The album is finished with "Brief Moments of Eternity", a partly celestial, partly chaotic and fully mind-altering track with narration from Jack Kerouac's book The Scripture of the Golden Eternity. Whoa! Check this guy out if you are into experimental psychedelic music.